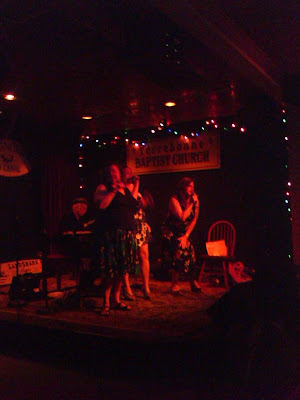 To hear music like this, you've got to hit the small clubs, like Chickie Wah Wah, a BBQ joint on Canal with specials like Red Beans & Rice, Marigny Brasserie or the reborn Spotted Cat both on Frenchmen.

"The Boswells - Martha, Vet and Connie (also known as Connee) - grew up on Camp Street in New Orleans 90 years ago during the last days of Storyville. After extensive classical training, they switched to jazz and recorded their first sides as teens in 1925, a mere two years after Jelly Roll Morton and other jazz greats waxed their first cuts. Their earliest influences were Mamie Smith, Bessie Smith, Enrico Caruso and the colossus of early jazz singing, Louis Armstrong. From Satchmo, they learned how to phrase, attack certain notes, use dynamics and the like. They also borrowed his habit of throwing out the melody altogether and fashioning a simpler, more swinging line.

The sisters hit their stride around 1930, and soon became nationally known through radio and movie shorts. In 1936, they disbanded when Martha and Vet each married. Connee continued for many years as a solo act.

It's possible to think of the Boswells as a conduit between Armstrong's innovations and white pop Americana like the Andrews Sisters. In fact, they also influenced the black musicians of their day, such as the Mills Brothers and a young Ella Fitzgerald, who was unstinting in her praise of Connee Boswell as her main inspiration. The sisters were pioneers in vocal harmony, using arrangements with as many as four or five tempo changes - which somehow always worked. They recorded rumba rhythms 15 years before Professor Longhair, and might have been the first New orleans musicians to record with a clave beat. And they certainly had the Crescent City penchant for pleasure at all costs: their music is out-and-out loony at times, as though delighting themselves was as important as entertaining their listeners."