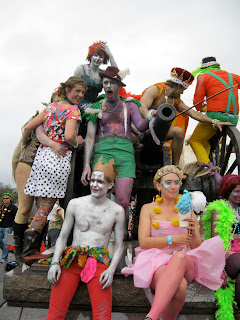 The weatherman predicted thunderstorms at noon, so I wasn't hopeful for daylong Mardi Gras day festivities. I got a phone call from a friend at 7:45 a.m., saying she was bailing on the Zulu parade - too cold and windy to catch coconuts.

I leisurely made a pot of coffee and continued watching for weather updates.

At 9:30 a.m, I got a call from another friend, saying let's go. It isn't too late to meet the St. Anne's parade, I said. They move so slowly. I've arrived on Royal Street at 11 a.m. before and it still hadn't arrived. (St. Anne, a casual foot parade, starts way up in the Bywater and makes its way down through the Marigny and French Quarter before disbanding. Last year, a wedding took place en route, so that slowed it further.) 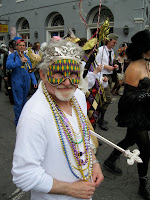 I adapted my costume for inclement weather and mounted my bicycle for the trip. My rhinestone glasses would serve as a windshield if winds got too strong and chartreuse nylon raincoat would keep me from being completely drenched. (I had some passing thoughts about how inappropriate this behavior was for someone almost 59, but that evaporated when I saw others much older in much more ridiculous costumes.)

Much to my amazement, the rains held off most of the day with just a brief shower around 1 p.m. We saw the entire St. Anne Krewe and then followed the Krewe of Cosmic Debris to the levee.

After that, it was a march up Bourbon Street to Frenchmen Street and another menagerie, including some miscreants from my lindy-hop crowd.