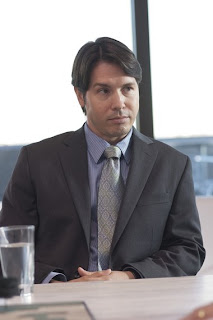 The "'Treme' explained" posts are intended as an episode-by-episode guide to the many unexplained New Orleans references in the second season of HBO’s "Treme."

For starters, review a comprehensive archive of the Times-Picayune’s Katrina coverage, including an animated map of the levee failures. In addition, these books, links, CDs, DVDs and streams might prove helpful. Also, go deep into the musical culture celebrated throughout "Treme

" at www.AmericanRoutes.org. The website for Nick Spitzer's American Public Media radio series, produced in New Orleans, has a searchable archive, and holds hundreds of hours of informative, pleasurable listening.
The episode's title is "Accentuate the Positive," a song (title: "Ac-Cent-Tchu-Ate the Positive") written by Harold Arlen and Johnny Mercer in the 1940s. It's heard twice during the episode, first in a club performance by John Boutte and others, then under the closing credits.
The episode's teleplay was written by series co-creator Eric Overmyer. The story is by Overmyer and Anthony Bourdain, author and TV host. The episode was directed by executive producer Anthony Hemingway.
Celebrated Nov. 1, All Saints' Day was "instituted to honour all the saints, known and unknown, and, according to Urban IV, to supply any deficiencies in the faithful's celebration of saints' feasts during the year," according to the The Catholic Encyclopedia.
"All Saints' has long been an important day in New Orleans and other parts of Louisiana, brought from France as La Toussaint (a name for the day which is still used in French-speaking and French-influenced areas of the state). The above-ground cemeteries of the Crescent City, themselves such a distinctive feature of the urban landscape, were virtually mobbed on All Saints' in the 19th century and earlier decades of the twentieth century," according to The Louisiana Folklife Program. "The wood engravings of the nineties and the photographs of the thirties show cemetery aisles packed with people, tombs festooned with flowers or beaded immortelles. It was a time for families to get together and for general socializing, a festive day for most. Vendors lined the streets selling tamales, popcorn and pralines, or perhaps la biere creole, a beer brewed out of pineapple pulp and fruit juice, according to 'Gumbo Ya-Ya.'
"Today in New Orleans All Saints' is more subdued but still an important day for visiting and decorating cemeteries. A modest but steady stream of people makes its way to family tombs in Lafayette or St. Louis No. 1 or Cypress Grove, and Save Our Cemeteries, an organization devoted to the study and preservation of the Crescent City's historic graveyards, has taken to stationing its members in several of the older cemeteries to pass out information and solicit memberships."
The youngster practicing the trumpet is Jaron "Bear" Williams, who is a member of The Roots of Music marching band, and will be featured in Richard Barber's upcoming documentary about the recovery of school music programs in New Orleans, "The Whole Gritty City." That's Williams on the film's website home page.
Feral chickens have proliferated in New Orleans since Hurricane Katrina.
The women in white are Zion Trinity -- Sula, Oshun Ede and Andaiye -- musicians and songwriters who also sell incense, candles, oils and jewelry on Frenchmen Street and at festivals.
The song Antoine Batiste plays at Danny Nelson's grave is Jelly Roll Morton's "I Thought I Heard Buddy Bolden Say." Antoine played the tune for Danny (via shared earbuds) in the hospital scene in episode seven of season one. Jelly Roll sings it here.
Toni and Sofia visit Angelo Brocato's Original Italian Ice Cream Parlor, a favorite of Creighton Bernette's. Hit with 5 feet of failed-levee floodwater after Hurricane Katrina, the store reopened in late September 2006. "Angelo Brocato's is the sweet side of New Orleans' red-gravy roots," said the Times-Picayune story, written by food editor Judy Walker, that Toni mentions to Angelo Brocato III. "Their particular piece of Sicilian culinary tradition traces back to the famous dessert parlors of Palermo, where the original Angelo Brocato learned his trade, and the recipes his family still uses. Brocato immigrated to Louisiana in 1905 and by the 1920s had a tiled confectionery store in the French Quarter on Ursulines Street that operated for 60 years. Brocato's handmade fig cookies, seed cakes and assorted biscotti have decorated local St. Joseph's Day altars for decades."
Though John Boutte's "Treme Song

" remains the theme, the opening credits have changed to reflect the events of 2006-2007, the period in which season two is set. Karen Thorson, a "Treme" consulting producer who assembled the sequence,explains the changes.
Sonny busks near The Praline Connection on Frenchmen Street, where Delmond dined in season one. The song is "Basin Street Blues," written by New Orleans native Spencer Williams in the 1920s. Watch and listen to Louis Armstrong play it. The competing street music comes from The Loose Marbles, profiled in this 2007 Dan Baum post for  The New Yorker.
The New York restaurant kitchen where Janette works is one of "Treme's" few constructed sets, built in a warehouse on the West Bank of New Orleans. The same warehouse holds the WWOZ FM-90.7 studio set.
Janette's line colleague is played by Paul Fitzgerald, whose prior TV credits include "Guiding Light" and "The Bedford Diaries." The psycho-chef they all work for, Enrico Brulard, is played by Victor Slezak, who's done guest roles in TV series ranging from "Miami Vice" to "The Good Wife." He is credited with playing four different characters on various episodes of "Law & Order." Several New Orleans chefs were cast for the restaurant scenes.
The saucier is played by Adrienne Eiser, a Montreal-native chef now working at the St. James Cheese Co. on Prytania. She's also an apprentice to a local Italian salumi maker. Eiser was forwarded an e mail from "Treme's" casting department looking for local chefs, and attended an open-call audition. "They asked everybody to show up in their whites and with their knife kit," she said. "I remember looking very carefully at the script they had given out, and realizing that they were actually looking for a New York kitchen and New York chefs. I put a lot of thought into what I was wearing. I saw someone there wearing chili-pepper pants. I used to work in Manhattan, and I know that chefs there do not mess around, and their whites are pristine at all times." The built kitchen set, she said, "was honestly one of the nicest kitchens I've ever been in."
Annie tours with the subdudes. Accordionist John Magnie played piano and sang at Davis's house party in season one. All Souls Day follows All Saints' Day.The band has made several national TV appearances, but the scene was Tommy Malone's first pass at saying lines. "(Lucia Micarelli) was helpful there, just real sweet," he said. "'Don't worry about it. Just be yourself. Just do it.'" Set in a Connecticut nightclub, the concert scene was shot in The Hangar next to Rendon Inn. In early November 2006, the subdudes were touring through Connecticut. "I looked it up," Malone said. "Somebody did some research." The second song the subdudes perform is "Carved in Stone," which Malone wrote after the death of his father. "Part of the memory of that song ... was that one of the things me and my dad did every year when I was a kid was, we'd go paint the (family) tomb," Malone said. "I wrote that song about a week after he passed. It was a great choice for the scene."

LaDonna thinks the new Saints quarterback looks pretty good. That would be Drew Brees, who joined the team in March 2006, a few weeks after before Reggie Bush was the team's first-round draft pick.
At Gigi's, Nelson Hidalgo dances to Wardell Quezerque's "El Pavo."
From the balcony at Tipitina's, Davis and Annie watch Galactic, the Dirty Dozen Brass Band and Juvenile perform "From the Corner to the Block." A video of the full performance can be purchased on iTunes.
The Klezmer All-Stars. Listen to some of their music here. Ben Ellman.
Outside of Muriel's on Jackson Square, Sonny checks out The Baby Boyz Brass Band.
The closing-credits music is Dr. John's rendition of Arlen and Mercer's "Ac-Cent-Tchu-Ate the Positive" from his 1990 album of pop standards, "In A Sentimental Mood." A link to a full list of the episode's music will be here as soon as HBO posts it.
Dave Walker can be reached at dwalker@timespicayune.com or 504.826.3429. Read more TV coverage at nola.com/tv. Follow him at twitter.com/davewalkertp.
© 2011 NOLA.com. All rights reserved.
Posted by Mary Grace at 6:43 PM