Today I saw the Rex Mansion 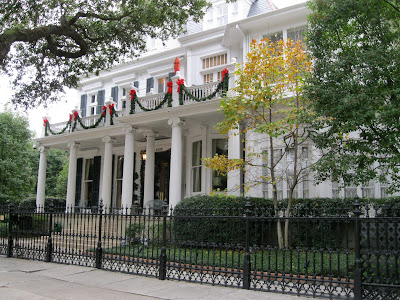 I'm reading "Nine Lives," a novel written by The New Yorker writer Dan Baum and also listening to the CD of the musical adaptation, "Nine Lives."

One of the songs, "How Very Like Sweet Anne," sung by the character based on a real New Orleans person, Billy Grace, is about his first visit to the Rex Mansion on St. Charles Avenue to meet the auntie of Anne, the girl he was dating. (As life here would have it, I knew her decades ago when we were both tour guides. She had just married Billy and flaunted her diamond ring.) I had no idea, nor did he, that she lived in one of the city's most famous homes. 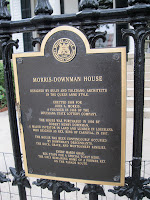 Rex is one of New Orleans' oldest Carnival krewes and its most prestigious with exclusive high society membership, if you couldn't already figure that out. The Rex Mardi Gras parade stops in front of the house every year to make a toast.

The same family has lived there 100 years. The mansion was built in 1888 for John Morris, founder of the Louisiana State Lottery Company. 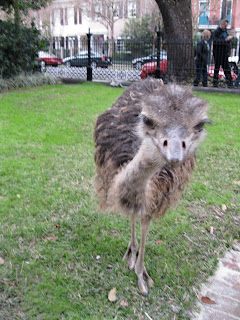 In any case, I've been hearing and reading about the Rex Mansion. So, today, I took the opportunity to see it for myself during the Preservation Resource Center's Holiday Home Tour. A friend and I visited seven stately Garden District homes, trying to decide where we'd like to live.

The first home had ostriches strolling around the grounds. The volunteer at the front gate was responsible for making sure the birds did not wander out into the street. The family also had a chicken coop. I am thinking they might be vegetarian and eat the eggs, but really don't know. 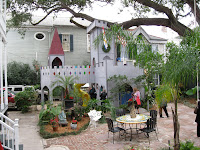 In the courtyard, there was an incredible castle for the kids to play in and the biggest porch swing I've ever seen. This was my friend's favorite house because there were signs of children.

Other houses included an Italianate mansion, an American cottage, a double shotgun and private girls' school that was a private home 100 years ago.

I saw a lot of elegant chandeliers, religious statuary, grand staircases, cornices, Mardi Gras heirlooms and very expensive paintings - some 19th century and others contemporary - but mostly wonderful. Among the pricey artwork were primitive pieces by our local sign painter, Simon Hardeveld.

There were several rooms painted red - one lacquered Chinese red. Two rooms were chocolate brown and two bright sunshine yellow. Entire walls that were covered by canvas murals - a couple with Grecian themes, others Renaissance and some just pastoral. Slave quarters were converted to fabulous modern kitchens (one still preserving the original cooking fireplace) and family rooms with flat-screen TVs.

All in all, however, the homes were very livable. Even where there were formal parlors and dining areas, it was clear the residents spent most of their time in the more casual rooms that looked a lot like your friends' homes, except with more exceptional drapes, pillows, carpeting and art. Several homes had swimming pools, but not lavish. Almost every home had an open bar; it is New Orleans and we enjoy our cocktails.

We enjoyed snooping very much and noticed everyone else brazenly poking around the homeowners' private spaces, including bedrooms and dressing areas.

It must have been a very successful fundraiser for the PRC, which works to preserve New Orleans' unique architectural heritage.
Posted by Mary Grace at 10:56 PM