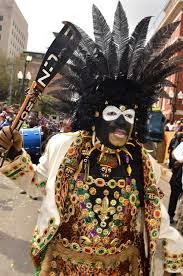 There is not much room to browse at the Zulu Memorabilia Shop, a sliver of a store at 807 N. Broad St. in New Orleans. But then, most customers know exactly what they want: a half-dozen ceramic coconuts, a grass skirt, a Mr. Big Stuff bobblehead doll. Not to mention the premier buy of the season: a signed and numbered 2014 Zulu Social Aid and Pleasure Club poster.

This is where riders in the Zulu parade get the throws they toss to parade-goers on Mardi Gras and the souvenirs they give to friends — or keep for themselves. It’s where they buy the attire required of every rider: black turtleneck shirt ($21), curly wig ($7), grass skirt ($7), white gloves ($1) and safety belt ($10.95).

“Some of the krewes (within the club) have their own individual costumes, like tigers, that go on top, but every member must have a minimum of these,” said John Marrero, club chairman of Zulu memorabilia who serves as shop manager. 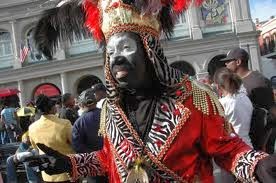 But you don’t have to be a rider or even a member of Zulu to shop the Zulu store, Marrero said. Although some merchandise is restricted to members only — such as the Zulu leather jacket ($300) — most of the inventory is available to the public. Any customer can buy a yellow and black Zulu umbrella ($14.95 for golf size, $6.45 for regular size) and a T-shirt ($15.95) or a long-sleeved shirt ($21) with the Zulu insignia.

Currently, the store is open from noon to 6 p.m. Monday through Saturday. The Monday before Mardi Gras the shop will be closed and its merchandise sold at the Zulu Lundi Gras Festival in Woldenberg Park. The store will re-open Mardi Gras morning for last-minute purchases. Then, from Ash Wednesday to Labor Day, it will open only once or twice a week. (Call 504-482-2588.)

But don’t wait that long to get your 2014 Zulu poster, which Marrero said is selling fast. Titled “Zulu Footwork,” the exuberant artwork by New Orleanian Terrance Osborne depicts four Zulu second-liners, with the clubhouse and its neon “Z” sign in the background at the left.


Every poster ($130) is signed by the artist and by the 2014 Zulu king, Garren Thomas Mims. The presidential edition ($155) is signed also by the current club president, Naaman Craig Stewart.

Other 2014 Zulu souvenirs are less expensive and appeal to the younger customer, Marrero said. This year the club is highlighting Mr. Big Stuff, one of seven traditional Zulu characters featured in the annual Carnival celebration. So special 2014 items include a Mr. Big Stuff bobblehead doll ($18), vinyl gift bag ($2.30) and medallion ($9).

Another Zulu tradition is the decorated coconut, which has been one of New Orleans’ most-coveted Mardi Gras souvenirs since the early 1900s. But in these safety-conscious days, coconuts must be handed out — never tossed — from parade floats and only by riders on lower decks.

Changing times have changed the Zulu coconut in other ways as well. In the past, many members decorated their own coconuts; now, the task can be outsourced.

“If a member doesn’t have time to decorate a coconut, we refer them to an artist,” Marrero said. Catalogs and samples of artist-decorated coconuts at the shop help customers make their choices. They then contact the artists directly.

However, there is one kind of coconut available at the shop: the patented ceramic version ($32) made by a local couple, Clarence and Ernestine Johnson. Typically, these souvenirs are given to special recipients, rather than being handed out on the parade route, Marrero said.

Pulling a jacket off a rack after spreading a set of oversized beads across a counter, Marrero clearly has a hands-on relationship with shop inventory. On Mardi Gras, however, he will take product distribution to another level. And, riding in the Zulu parade with the Firetruck Krewe, he will see just how well parade-goers accept the merchandise.