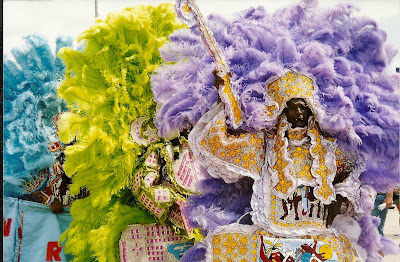 On the Trail of the Mardi Gras Indians
By Chris Rose, New Orleans Magazine


So many spectacles compete to overload the senses during Mardi Gras. So many sights, sounds, colors, costumes, parades, songs, rainbows, fever dreams, unicorns and pounds of flesh to behold, light the eyes, satisfy appetites and quench every thirst.

It takes effort to stand out amidst the glitter and gold, baubles and beads, spandex and spangles, flashing lights and fairy dust. It takes money, time and commitment. Serious commitment.

It takes the Mardi Gras Indians. Those singular, mythic, mysterious and inscrutable men, women and children of color who preserve and perform a sacred 19th century ritual borne of slavery, emancipation and masquerade.

It's quite a challenge to try to describe the Indians to the uninitiated. They are tight-knit, turf-conscious, prideful working class black folks dressed up in flamboyant, meticulously hand-sewn, ceremonial Native American costumes, face paint and feathers, stalking each other through New Orleans back streets in some sort of concrete jungle war game. But instead of pretending to kill their rivals, they face-off in a ritualistic preening, drumming, dancing, chanting show-down, taunting each other and arguing over who is...prettiest.

What's not to understand about that?

How the Mardi Gras Indians came to be is a subject of much academic - and barroom - debate. It's all folklore, legend, history, mythology and braggadocio.

Are they a living tribute to local Native American tribes who sheltered their fugitive forbears from the indignities of lives waged in the fields of Confederate perdition? Or are they, as popular notion goes, a spin-off of Buffalo Bill's Wild West Show from the late 19th Century? Or are they just a bunch of rowdy, ostentatious, over-the-top, half-cocked revelers who take this Mardi Gras thing...Way. Too. Seriously.

Indeed, they are the heart, the soul and the beat of the street. I remember the first time my kids ever saw an Indian, one Fat Tuesday afternoon many years ago, when we were driving back Uptown after spending the morning basking in the colorful revelry of the Marigny and French Quarter.

He was alone, turned out in Bimini lime feathers and mint green rhinestones, staggering erratically on the Broad Street overpass, a chief who seemed to have lost his way – and his tribe! He stumbled in front of my car, I swerved wide around him and watched from my rearview mirror as my kids asked: “Daddy, what was that?”

How do you tell someone?

Over the years, it became our Fat Tuesday tradition: We would not park down near the Quarter until we found an Indian gang wandering around the streets of the 6th, 7th or 8th Wards. And we always did.

The last time I saw a Mardi Gras Indian was last March, on St. Joseph’s night, when the gangs and thousands of spectators annually pack the streets of Central City for intimate neighborhood rituals far from the wide prying eyes and intrusive cell phones of visitors and tourists. This was a young man, junior member of his tribe, splayed out on the sidewalk with a gunshot wound to the thigh.

I heard the shot. I joined the crowd of previously joyous observers now looking on in wonder, fear and despair. Everyone wondered: What happened. Who is he? Why was he shot? And: Who the hell shoots an Indian?

Another mystery of this town. It will build you up and tear you down. It’s the ecstasy and the agony. It’s the beauty and the beast. It’s laughter and forgetting.

It’s the prettiest thing I’ve ever seen. With an ever-present menacing drumbeat out there in the distance.

And so it goes.