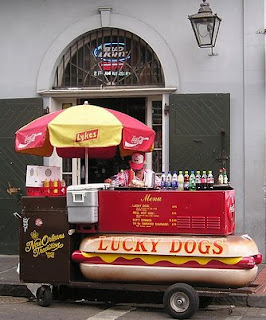 I ate my first Lucky Dog today. I must say, it had a strange color - tan. Not at all the color you hope for in a hot dog, even when you know they've been dyed. The vendor took longer than anyone I've ever seen to prepare it. He had to pause for a few seconds to remember where he'd put the relish and then where to find the mustard, even though he'd probably served 100 that day. Nobody minded since it still took less time than waiting for a table at any restaurants near Jackson Square. Being a Lucky Dog salesman must be one of the last chances for the hopelessly unemployed.

"A Confederacy of Dunces" made Lucky Dog famous as its protagonist, Ignatius J. Reilly, had a cart and a route in the French Quarter and occasionally sold one when he hadn't eaten them all himself. The company has survived all these years, despite what the Pulitzer prize-winning novelist John Kennedy Toole had to say about it.
Posted by Mary Grace at 8:48 AM