New Orleans is a Catholic town 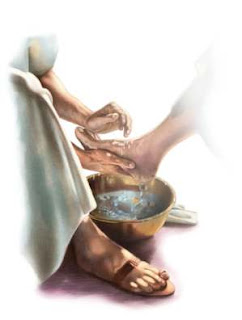 The New Orleans Times-Picayune reported Friday that the president of St. Bernard Parish washed the feet of his employees as a symbol of his humility during Holy Week.

Jesus Christ is said to have washed the feet of his 12 disciples on the day before he was crucified.

The president said he had not pressured his employees.

"If they wanted to participate, they could. If they didn't, no problem." Jesus would have said the same thing - no problem.

He added that feet washing in the government complex is not an overtly religious act, but a universal symbol of humility.

Some employees said they wished he'd organized a group of volunteers, rather than walking around the building asking staff members if they wanted their feet washed.

The Parish Councilman at Large told the Picayune: "I certainly wouldn't want to diminish the goodwill that was exhibited by the president in the spirit of Easter. I believe his intentions were good."

Only in New Orleans. Happy Easter!
Posted by Mary Grace at 8:14 PM