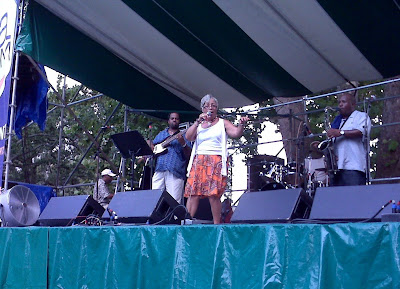 Boarding the plane to return to Boston, my head is still bobbing to a mash of The Rebirth Brass Band, Miss Sophie Lee, Jeremy Davenport

and a host of other bands and singers that may never, thankfully, be erased from the music cells in my now fully baked New Orleans brain.


Every so often, with no warning, like some kind of Tourette syndrome, my feet break out in a second line strut, my arm starts pumping synchopatedly in the air and I’m down the rabbit hole that is known as New Orleans.
Clearly, I’ve drunk the Kool Aid and have to return for more. What happened?
The tenth annual Satchmo SummerFest - a festival celebrating the life, music, and legacy of New Orleans born Louis “Satchmo” Armstrong (August 4, 1901 – July 6, 1971) , was held from Thursday August 5 - Sunday August 8 at the old US Mint, now part of the Louisiana State Museum, not far from the French Quarter.
I soaked it up like it was the juice under a roast beef po’ boy. 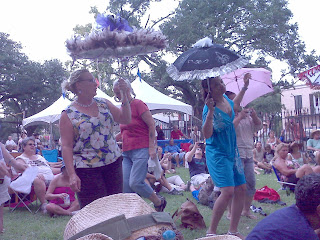 Music poured from four stages around the old US Mint Saturday and Sunday afternoons. The Palm Court Jazz Café on Decatur Street hosted a two days of “Satchmo Seminars. ”
Armstrong historians recounted his life in the context of the musical and cultural milieu in which he lived; musicians explained how Louis changed the way jazz was played; and a panel of writers, actors and musicians associated with the HBO series Treme described how music has descended from Armstrong’s era to today.
This city has a mother lode of the most
cross-culturally astonishing music in the world.
The festival was free and open to the public. The public obliged by the thousands. Traditional and contemporary jazz bands, many with fabulous singers, and brass bands with attitudinous swagger played from noon to 6 pm Saturday and Sunday. This was a Louispalooza of epic proportions.

Outdoor music events here look like one huge block party. Fold-up chairs in canvas totes (with cup holders and shade tops) are probably kept right by the front door, ready to be slung over the shoulder at a moment’s notice and marched to the side of the street for a parade or a grassy park for a concert. There was a Walmart load of them plopped in sun and shade on the grounds of the US Mint.
Music festivals here are a family thing. There were loads of children toted on shoulders, prammed along in baby carriages, or tagging along with their parents. Inside the cool halls of the US Mint there was a generous handful of activities for children: the event promised a Satchmo collage-making project, a second-line umbrella creation station sponsored by the New Orleans Jazz Celebration, an activity station sponsored by Krewe of Muses, coconut decorating sponsored by the Zulu Social Aid and Pleasure Club “Junior Zulus,” and more.
Delfeayo Marsalis of the fabled New Orleans Marsalis family.
Little tykes who mimicked the adults swaying around the two main outdoor stages became instant American Idols, the object of cheers and photos. This isn’t just entertainment I’m watching, it’s culture being passed on to the next generation.
Me and Satchmo jammed a boatload of music into our birthday weeks.

The early afternoon temperature on the grounds of the old U.S. Mint is pushing 100 degrees, the humidity lagging slightly behind in a languorous 91% August bluesy shuffle. Satchmo SummerFest, the 10th annual birthday party for one of New Orleans recognized legends, is in full swing, and I do mean swing, baby.

Today’s oven temps don’t seem to faze people. “We’re stronger than those people in the shade,” a young man holding a cold beverage scoffs on the way to the mini savannah in front of the Cornet Chop Suey Stage. Judging by the number of people pretending the sun was an invited guest, he had a point.
Louisiana is the world’s capital of festivals. It celebrates just about anything grown in their soil and caught in their waters and the way natives bake, boil, sauté, roast, or fry them. It celebrates their music and their musicians. The Satchmo SummerFest is one of New Orleanians favorites. If you don’t care for Louis Armstrong’s musical legacy, you can pick one of the other 400 or so festivals held around Louisiana every year.
What we have here is jubilation and perspiration. Minus intoxication. The one clearly intoxicated man I saw in the two days of the festival, including the Friday night Satchmo Strut on Frenchman Street, danced by himself near the state. When he proceeded to dance near women around him, he kept on the civil side of behavior and no one panicked.
The crowd got larger as the afternoon ticked away.
Considering there were over 20,000 people covering the rainbow in color and heritage and age who flocked to the festival over two days, this is miraculous - another testament to the mentality here. People come to have fun. They drink, they smoke, and they behave. I can’t say that as emphatically about public festivals in Boston.
The vibe here is different. I think it’s called Southern. I hear lots of “Excuse me’s” or “Sorry’s” if someone jostles me in a crowd.
And everybody seems to leave their agenda at home. I’m certain that people in the vast crowd have their own religious and political party affiliations and attitudes about race and class - they seem to take that as a given and they don’t have a need to tote their convictions around like a billboard. They’re friendly, social, and sociable. 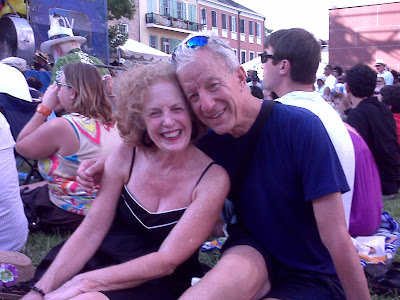 A dad brings his son up close to watch Delfeayo Marsalis and his quintet.
As a boy, Louis Armstrong carried buckets of coal to establishments in New Orleans’ Red Light District, where he heard bands like “King” Oliver play. As a man, when he became King of the World of Jazz, he never forgot getting his first trumpet lessons here at 11 years of age and kindnesses from people who recognized a boy with drive, talent and a boatload of personality.
His playing and his personal charisma helped pave the way for other black musicians to be accepted into the mainstream. This weekend, and at every previous Satchmo SummerFest, New Orleans musicians pay him back.
Every musician I heard on Saturday, singer Jane Harvey Brown, trombone player Delfeayo Marsalis, singer Linnzi Zanoski, Japanese trumpeter Yoshio Toyama and the Rebirth Jazz Band paid Pops tributes and played the daylights out of some of his songs.
“Elvin Jones had his own take on Louis,” Delfeayo Marsalis said, then whipped off a version of “Don’t Mean A Thing If It Ain’t Got That Swing” driven hard by his drummer.
Needless to say, we swang along with the band. If there wasn’t already enough heat in the city, The Rebirth Jazz Band finished off Saturday’s concert at the U. S. Mint with a set hot enough to fry a catfish.