Picnic in a graveyard for All Saints Day

The Society of the Dearly Departed will make its debut, not in a ballroom, but in a cemetery on All Saints Day.

Picnicking in the graveyard might seem weird, but not in New Orleans, where loved ones are toasted with wine and good food, enjoyed while talking about the deceased. 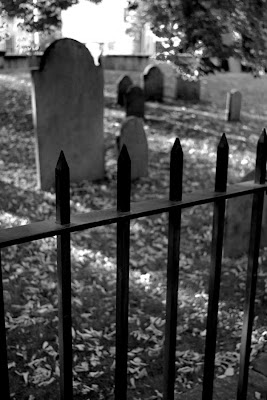 All are invited to join the Society of the Dearly Departed at St. Louis Cemetery No. 1 on Monday from 10 a.m. to noon, said Lloyd Sensat, who co-founded the society with Gene Cizek.

The goal of the society is to perpetuate the traditions of All Saints Day in historic cemeteries of New Orleans, said Donna Wakeman, editor of the Faubourg Marigny Improvement Association newsletter.

A jazz band will play during the gathering and famous Creoles will be resurrected in period costumes. Barbara Trevigne will play Voodoo queen Marie Laveaux; Barbara Robichaux a Storyville lady; Greg Osborne is Apollinaire Perrault; and Sensat is Bernard de Marigny.

Marigny's great-great-great-great grandson, William de Marigny Hyland, will appear in the flesh and a wreath will be placed on the grave site where Peter Patout planted antique Louis Philipe roses. Robert Florence's Friends of New Orleans Cemeteries will replace the blue note on the Musicians' Tomb, decorated in authentic 19th century mourning by Anna Ross Twichell.

A noon Mass for the Society of the Dearly Departed will be celebrated by the Rev. Tony Rigoli at the Mortuary Chapel. Now Our Lady of Guadalupe Church, 401 N. Rampart St., it was built in 1826 and was originally a mortuary chapel when funerals from St. Louis Cathedral were forbidden by city ordinance because of yellow fever.
Posted by Mary Grace at 8:59 PM