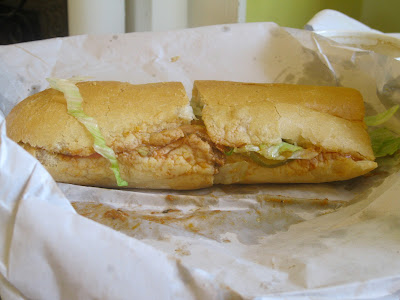 "This was not a career move for any of the people who helped out, believe me.
These were neighbors helping me out who wanted to get New Orleans rolling again and po-boys is New Orleans," said Guys owner Marvin Mathern in A Season of Night: New Orleans Life After Katrina by Ian McNulty.

Just in case you suffer from the misfortune of not being born and raised in New Orleans, I am going to tell you a few thigs about the crown jewel of our local cuisine, the shotgun house of New Orleans eating, the po-boy.


By nine months of age the first words out of a baby born in New Orleans are not “Mommy” or “Daddy” contrary to what the parents may tell you.  The first words you’ll hear from little baby Boudreaux are a babbled, drooling version of Domilici’s or Tommy’s or Parkway Bakery.  Whatever the name of their favorite po-boy place is, they can say it.  By a year they can order for themselves jabbering roast beef and gravy, fried shrimp or oysters and, yes, they want it dressed.  And don’t be surprised when you see their fat little fingers grab a bottle of Crystal hot sauce and shake it like nobody’s business.  They know what they want and they know where they want to get it.  And don’t forget the Barq’s root beer in a sippy cup.

Invented by the Martin Brothers at their coffee stand (no, it wasn’t a Starbucks), in the late twenties during a streetcar worker strike, the po-boy came to life as an inexpensive way to feed the “poor boys” on the picket line.  Years earlier the Martins had themselves worked on the streetcars.  The brothers would throw whatever they had available at the time in between two halves of a loaf of George Leidenheimer’s light as air crusty French bread and feed the hungry streetcar motormen and conductors on the picket line.  Shrimp, oysters, catfish, soft-shell crabs, roast beef and even French fries and ham and cheese covered with lettuce, tomatoes and pickles would feed these “poor boys”.  The coffee stand the Martin Brothers started before the strike grew to a successful restaurant on St Claude Ave by the end of the strike.  Po-boys were the bedrock of the New Orleans diet through the hard times of the Depression years.  A fifteen inch standard po-boy cost ten cents in the thirties.  The brothers split up in the late thirties but both maintained the Martin and Son Poor Boy Bar and Restaurant name in their different locations around the city surviving into the 1970’s.  By that time the po-boy fame had spread far beyond the city of New Orleans.

Today every self-respecting New Orleanian has their favorite po-boy and favorite place to get it.  An outsider might find it difficult to understand how a po-boy made on the same Leidenheimer’s French bread, dressed with the same tomatoes, lettuce, pickles and mayonnaise, and filled with roast beef, shrimp or oysters can taste different.  But to born and raised New Orleanians, they are as different as night and day.  If you need to kill an afternoon just ask one what the difference is.  They’ll tell you but it’s going to take hours.  New Orleanians don’t answer questions; they tell stories that will cross several generations as well as parish lines.  Should the shrimp be fried or barbecued?  Should the bread come from the Gendusa Bakery or Leidenheimer’s?  Do you put gravy on it or not?  What do you mean dressed or not dressed?  You better open a Dixie and pull up a chair because you aren’t going anywhere for several hours.

If you don’t have the time to invest in hearing Boudreaux tell you about the po-boys that his father’s mother used to bring him when she would pass by from some long gone po-boy shop, you can just ask me.  I’ll be more than happy to tell you where you can get, without a doubt, the best fried pork chop po-boy, dressed of course, anywhere in New Orleans.

When I walk to Guy’s Po-Boys on Magazine Street from my house I walk right past Domilici’s Po-Boys and Bar where there’s always a line coming out the front door and down the sidewalk.  I’ve been there and they make a good po-boy but not as good as Guy’s.  When I walk in Guy’s I’m walking in on family.  Marvin the cook can barely look up from his grill to yell, “Magazine Street Dave.  Where you been at?”  Troy shouts his unique version of my name.  Marvin’s twin sons give me high fives.  I’m in my glory.  I don’t even have to order.  They already know what I want.  And of course I want it dressed.  They know that.  The game is on the funky old TV on top of the soda cooler which is full of Barq’s root beer.  There’s a wall rack next to the cooler full of every kind of Zapp’s chips you can get.  The Formica topped tables hold rolls of paper towels and bottles of Crystal hot sauce.  What else could you need?  Folks shuffle their chairs around until you have a seat.  Everybody sits together at Guy’s.  Rich or poor, black or white, young or old, it doesn’t matter.  We’re family here.  We share the common knowledge of who makes the best po-boys in New Orleans.

When that fried pork chop po-boy comes over, dressed of course, everybody who isn’t eating is already deep in conversations.  “How’s your Mom and them?  What’s your Daddy doing?  Tell your brother I said to pass by.  What happened with St Aug on Friday night? When are we going fishing?”

But now it’s time to eat and that requires complete concentration.  Unwrap that baby, put half of it on a paper towel and roll the other half back up.  That’s so it looks like you’re only going to eat half of it and take the other half home for later.  That would be the sensible thing to do but you know it ain’t going to happen.  My entire Saturday has been planned around this po-boy. Anything that had to get done that day is already done. Or as Marvin says, “It got did.”  I carefully shake on the right amount of Crystal hot sauce, take that first bite and sit back with the sun on my back and my friends are all around and laughter is surrounding me and that’s it.  That’s as good as it gets.

An hour later I finish that second half off.  I push back my chair and try to breathe.  My eyes are glazed over and the world is perfect.

I tell everybody I’m heading home.  It comes out as a mumble.  My brain is already starting to numb.  I swagger home, across the street and down the block. I greet my wife at the door. She just rolls her eyes and mutters something about something.  My hearing has already shut down.  My dog is waiting for me and we walk back to the bedroom.  He knows the routine.  After eating one of Marvin’s miracles, my full size fried pork chop po-boy, dressed of course, there is only one thing I can do.  Sleep is calling me and I answer yes.  I turn off the lights.  I turn off my cell phone.  I climb in to bed and fall in to a three hour New Orleans po-boy induced coma.  I’m smiling.  I live in New Orleans.

Everything else will have to wait.

By Dave Holt
Posted by Magazine Street Dave at 9:01 AM